Take a look at the image below: 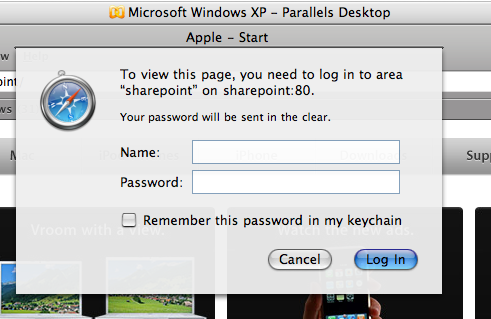 Look familiar? It’s the standard MacOS X (OS X now, I guess) dialog sheet. Just how much of the Cocoa library is cross platform now? Try CoreFoundation and CoreGraphics. They are DLLs included in the Safari beta.

By the way, it’s interesting that the Safari beta wants to store my password in keychain, something that doesn’t exist on Windows.

Let’s add up some things:

Apple starts with QuickTime and (quietly) ports Carbon to Windows. Apple then adds iTunes to Windows using more of the Carbon library. In order to get iTunes 7 running on Windows, they port most of the Cocoa framework and it works fine. The roll out Safari to flesh out the bugs in the networking code. Next WWDC in 2008: Cocoa for Windows, Xcode one-click compile for Windows.

By then, Apple would have in place on Windows:

Widgets running on Windows as “Dashboard for Windows”…

1 thought on “Safari is the Trojan Horse that carries Cocoa”