So it’s a new year and a great reason to start writing here again. Let’s restart one of my passions this year: writing!

The harshest sign of all for me, however, was spending a day with my youngest sister last week during the Thanksgiving holiday and realizing just how much of her life is occupied with figuring out what to buy, when to buy it, and what storage to buy to store everything else that has been or will be bought. I think we talked about other things for all of about thirty minutes.

Follow the link to read the quote in context, but it mirrors experience I’ve had with others I know. It’s disarming to say the least.

I’ve asked myself the question “Why bother with Frontier?” many times in the last month.  I spent some time talking to people on the Frontier Kernel mailing list about getting involved with the project again.  I learned many things, including the fact that I’m not qualified to help in a meaningful way right now.  Sometimes knowing your limits is as important as knowing your strengths.  In my case, I would need to learn 10 years of C coding to catch up to the complicated environment that is the Frontier kernel.

I think instead I’ll spend my time building the software that I want instead of trying to fix the issues with the existing project.  There are many things about the Frontier coding environment that are appealing:

That said, I think that I can build my own software while addressing my shortcomings.  I have the books and the tools to learn C, compile programs and run them under MacOS X and Windows.  I have the motivation to learn and some spare time.

So, why bother with Frontier again?  Why indeed.

I’ve tried posting some comments on Scripting News lately but each has been moderated away by Dave. Here’s the last one, a request for him to point out to me the moderation reasons:

You seem to moderate all of my comments but I believe I’m posting relevant content to your discussion. Can you point out a mistake I’m making and help me correct it?

I’m posting this here because I think that’s Dave’s preferred method of communication: open and honest.

Here’s a shot from the second floor looking down: 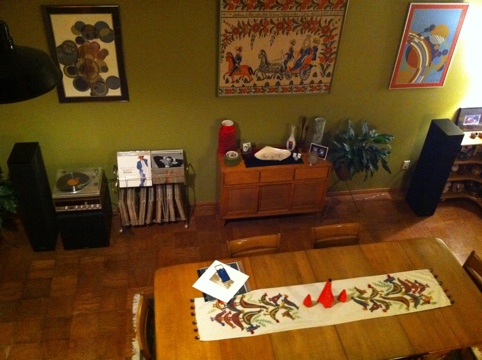 Overall, I can’t be more pleased. Like all true life experiences, there’s a great story behind this. Let’s start with the amp:

We found this Sansui 2000 amp in the furnace room of the Charing house in 2008 when we moved in. It took a year for me to decide to move it and only then to the garage. It had a matching pair of (now awful) Sansui speakers that were good only for garage use. The amp has inputs for phono and tape plus an AUX port.

My brother-in-law Blair Smith found these Definitive Technologies speakers at an estate sake near his house. I won’t say how low the price was but call it less than a good dinner for two. This weekend we were in KC to see Blair and Mary, the kids plus Mary’s godfather Bob Jester and his wife Emilie. First thing I did was corral Blair and get the speakers moved to our car. Good news–they fit!

After a fantastic weekend and the trip home, I had a plan. I’d set them up in the dinning room just to test, the figure out what to do next. They haven’t moved yet and I don’t think they will.

A special thanks to Blair for making this all possible. Truly, these are the best speakers I’ve owned!

Reading weblogs through the magic of RSS, I tend to be a bit behind sometimes. An old online friend [Matt Mower talked of making changes to his weblog](http://matt.blogs.it/entries/00002998.html) and that got me thinking of the same thing. At one time, back in 2003, this weblog was a big part of my identity. “house of warwick” means something to me, but not to many others. I’ve had stevekirks.com for quite some time and it seems to make sense to move content over there. I’d like to move to something hosted by others since it’s also out of fashion to run your own server. Frankly, I’ve got other things to do.

Setting all of that aside, it’s a matter of economics that keeps me where I am. I can’t afford to spend the time to make wholesale changes to the site or it’s structure and the money remains a factor. It costs more to host with wordpress.com then it does to host your own–and it should since they are doing the hard work. At some point I’m going to have to decide is the time I would spend worth the money. I’m leaning toward “yes”.

Back to the disposition of houseofwarwick.com…

I’m thinking it should be boxes that represent window panes through which to peep and spectate on my world. A box for Twitter, one for Facebook, another for long pieces of writing like this, may others for pictures.

Cook on low for 10-12 hours. Uncover and cook on low for an additional 10-12 hours or until is roughly your desired thickness and most of the liquid has evaporated. Allow to cool completely then pour into the food processor and puree. Pour into clean glass jars. Refrigerate.

Reading the text under the progress bar on this dialog box…

My first thought: who disconnects from the Internet any more?